The horse is an evolved animal with more than 500 breeds worldwide. From island to desert and steppe – they can be found on all continents except Antarctica. They’ve adapted to different environments over time, but some have gone extinct or are rare because of various reasons.

This guide discusses some of the rarest horse breeds today with facts about them. We also cover how endangered and rare horses are classified. Here are some of the topics:

What’s the difference between an endangered and rare horse breed?

Note: After writing this article, a member of the Equus Survival Trust contacted me and provided some very helpful and interesting information about endangered horses. I’ve noted their contributions under the relevant topics.

What are Endangered Horses?

Horses are considered endangered when they are at risk of becoming extinct in the wild. There are many reasons why horses may be at risk of extinction, including loss of habitat, disease, and human-caused threats.

Horses are one of the most popular domesticated animals in our world today, with close to 10 million in the United States alone and more than 50 worldwide. Despite their popularity, many breeds are endangered.

There is a difference between extinction and endangerment – extinction means there is no more of a particular animal left in the world. In contrast, endangerment means that all there remains is a small population.

Endangered species may be at risk of extinction for various reasons, such as breeding practices or habitat destruction. Protecting endangered species is important so they can continue to live for years to come.

The Livestock Conservancy is a nonprofit organization working hard to help save endangered horse breeds from extinction by creating awareness of the problem and providing donations for organizations that care for these animals.

What’s the difference between an endangered and rare horse breed?

The difference between an endangered and rare horse breed is that an endangered breed is at risk of becoming extinct, while a rare breed is not. This is determined by the number of members in the breed’s population. The Livestock Conservancy keeps the best records and categorizes at-risk breeds.

There is no category for rare, but it’s generally accepted to be species on the watch list. So for our purpose, an endangered horse breed is one with less than 2000 individuals left, while a rare breed has more than 2000 but less than 10,000.

The world’s endangered horse breeds include some of the most iconic and beloved equine species on the planet. These horses face a range of threats, including habitat loss, disease, and human activity.

The Livestock Conservancy has been working for nearly 40 years to save and preserve many different endangered horse breeds from extinction. The organization’s work is vital in order to keep our rich equine heritage alive.

The following are ten of the most endangered equine breeds:

Przewalski’s Horses are perhaps the most well-known of all endangered horse species. This majestic creature was once thought to be extinct in the wild, but recent efforts to reintroduce them into their native habitat have been somewhat successful.

However, their population is still quite small, and they continue to face threats from poaching, habitat loss, and climate change. Przewalski’s are the last truly wild horses, as well as being critically endangered.

Once thought to be descendants of domesticated horses, new discoveries have indicated that they shared an ancestor with our modern-day version 500 thousand years ago!

How many remain: There are approximately 1,900 Przewalski horses living today.

The Brabant is originally from Belgium. These heavy draft horses weigh between 2000 and 3000 lb.

How many remain: There are only 100 purebred Brabants in America and Canada, according to the Livestock Conservancy. However, according to the Equus Survival Trust, the American Brabant is not endangered and is, in fact, doing quite well these days.

The American Cream Draft is the only surviving draft horse breed developed in America. This rare and historic animal originated in Iowa back around 1900., They typically weigh about 1600-2000 lb. and stand between 15 and 16.3 hands tall.

How many remain: Less than 400 horses remain.

The Hackney horse breed originated in Britain. They were mainly bred as carriage horses.

How many remain: Today, less than 3000 horses remain in the world. Only 200 American hackneys exist.

Caspian horses are an ancient breed with roots that trace back further than Arabian horses, which many consider the oldest surviving horse breed.

“The Caspian Horse breed was ‘rediscovered” in 1965.  It was thought extinct previous to that in the world outside Iran.  Iran at that time didn’t realize what they were. It was the sleuthing of Louise Firouz, an American woman living in Iran, who authenticated them with the help of many others.”

How many remain? In 2022, not including undocumented Caspians in Iran, there are approximately 1200 registered or verified purebred Caspians. Most are in North America (around 500), and the rest are scattered in Europe (UK, France, Denmark, Sweden, Norway & the Netherlands), including less than 100 in Australia/New Zealand.

Shire horses are one of the largest horse breeds, but their population has declined steadily for decades. As the turn of the century came about, a million or so shires existed.

But advances and modernization made them less necessary their numbers dwindled until now you will only find one every once in a long while.

How many remain: Fewer than 1,500 Shire horses remain today.

The Suffolk Punch horse breed hails from Great Britain. It is a heavy draft horse chestnut in color.

How many remain: Only 600 Suffolk Punch horses in the USA and about 200 in the UK. Update from the Equus Survival Trust: The Suffolk is critically endangered, with around 800 in North America and 300 in the UK.

The Galiceño is a Spanish colonial horse breed. They grow to be 12hh – 13.2hh in height and can be found in many colors, including black, bay, chestnut, cremello, palomino, dun, buckskins, and roan.

The Galiceno is a small but mighty horse breed that originated in Mexico. These horses can easily carry an adult rider and are popular with cattle ranchers worldwide, including those at the famous King Ranch.

How many remain: The breed has reached critically low numbers of less than 200.

The Nokota is a beautiful breed of horses created by crossing local Indian ponies with Thoroughbreds, Spanish horses, and draft and harness horses.

Nokota is a semi-feral horse breed known for its blue roan color and ambling gait. This versatile and intelligent animal has been used in events such as barrel racing, trail riding, and cattle ranching.

How many remain: The exact numbers are not known. However, the Nokota Horse Conservancy has termed it as rare and endangered. The National Park Services currently keep a herd of only 70-100 horses.

The Cleveland Bay horses were crossed with lighter breeds which led to a dramatic decline in the number of pure-bred horses. The offspring of these crosses were lighter, faster, and therefore higher in demand.

How many remain: Today, the worldwide population of Cleveland Bays is about 500.

According to information provided by the Equus Survival Trust, the last mare died a few years ago. In 2010, just 5 Abaco Barbs were remaining. The breed was common in the Bahamas in its heydays. Unfortunately, they were hunted for food and also poisoned by insecticides. The last mare died some years back.

Reports say that this Greek Horse breed might even be extinct. By the 1990s, there was just one breeding stallion left.

The Guoxia is a Chinese horse breed. They are tiny horses measuring up to 10 hands high. Today, not much is known about the elusive breed. In the West, it might be extinct.

The Carolina Marsh Tackies is a pony breed built like a horse. The feral breed is dun-colored and extremely rare – almost extinct. Today, only 300 Marsh Tackies remain. Dr. Sponenberg is striving for their well-being.

Rottaler is a German horse breed, a tall, heavy warmblood and the founding breed of the Bavarian warmblood. About 20 breeders in Bavaria claim to breed the Rottal.

Sorraia is a beautiful horse breed that is nearly extinct. It is also the closest relative of another extinct horse breed called Tarpan.  Sorraia has Portuguese and Spanish origins, and it is level-headed and strong.

The Thessalian horse is a Greek horse breed that is probably extinct by now. However, breeders have crossed the Thesalys with Arabian horses with great results.

From its name, one might think the Tiger horse has stripes or is brindled. However, that isn’t the case. Its hooves are striped, which has earned it its name. In 2005, only 50 of this naturally gaited horse breed were alive.

Tokara horses are small horses measuring 12 hh. By 1974, they had become nearly extinct, with just one purebred Tokara alive. Breeders then painstakingly recreated the Tokara, and today you can find almost 100 Tokara horses in and around the islands of Japan. In 1953, the country even designated this horse breed as its natural treasure.

Rare Horse Breeds of the UK

Here is a complete list of rare horse and pony breeds in the UK.

If you want to know the difference between rare and endangered horse breeds, it’s best if we take a look at their populations. Rare horses can be identified by having less than 10,000 members in total, whereas those considered endangered have only 2,000 or fewer remaining.

Today, many horse breeds are endangered, and some are under serious threat of going extinct. We hope governments and the animal-loving public work together to save these unique animals.

For more information on rare horse breeds, take a look at this YouTube video.

What is the rarest horse breed?

According to The Livestock Registry, the Galiceno is the rarest horse breed. The Cleveland bay and Suffolk Punch draft horses aren’t too far behind.

Which is the ugliest horse breed? 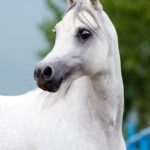 There are many ways of looking at beauty for horse lovers: some people might say that it lies in the eyes of the beholder, while others would contend that Arabian horses, with their unique head shape, are the ugliest horse breed.

What is the prettiest horse breed?

Every horse breed has its unique beauty, but I think Warmbloods are the prettiest horses. American Paint horse, Friesian, Andalusian, and Halflingers are some of the world’s most beautiful horses.

Black Friday 20-70% off Everything