While looking at the racing form, I noticed most racehorses were between three and six years old. Seeing the ages of the horses made me wonder why racehorses are so young.

Many racehorses are so young because they reach their peak performance levels at the ripe age of four and a half. Also, there is a lot of curiosity surrounding young racehorses, and it’s typically reflected in big purses. Few racehorses compete over eight years old.

Racehorses are individuals, and some may blossom earlier than others, but most racehorses peak relatively young, but they’re exceptions, and some horses excel later in life.

Horses hit their peak speed at 4.5 years old, after 4.5 years of age horses typically level off until five years old and then slowly decline in speed. This information was garnered from a different study by the Journal of Equine Science.

In the second study, researchers were attempting to determine in detail the effect of aging on speed. They found that young horses, from two years old to three and a half years old, showed a slow but steady increase in their rate. From the age of 3.5 to 4.5 years, horses made a significant increase in their speed.

The researcher had difficulty providing accurate figures for the rate horses’ speed declined with age. The reason for the challenge was due to the number of horses that retire from racing after five years old.

Horses have cartilage at the ends of their bones as they develop the cartilage fuses between the bones. It takes six years before the cartilage in a horse has finished fusing.

The fusion of the cartilage is examined to determine the developmental stage of a horse; once the cartilage has completed the fusion process, the horse is considered grown.

The last bones to fuse on a horse are the vertebrates in its neck and back. These bones commonly fuse at six years old. This link provides a look at a bone growth chart displaying the age bones develop.

What Age Do Racehorses Start Training?

I went to the training center recently to watch a two-year-old have his first official workout. The horse did ok, but it made me think about how young horses start training.

Most racehorses begin formal race training between 18 and 24 months old. However, their general lessons started at a much younger age.

Before a young horse is ridden, its knees are examined to confirm the cartilage has fused. Riding a horse before its knees are fused can result in injury to the young horse. A horse’s knees commonly bind between 18 and 24 months old.

At the racetrack early in the morning, a lot of young horses are in training. Some are just starting out and others preparing for a race. There are a lot of steps to get a racehorse ready for its first race. The horse above hasn’t raced yet but has been working well and we have high hopes for him.

Racehorses start learning as a yearling

A yearling is a young horse between one and two years old. By the time most racehorse yearlings turn one, they’ve been handled a good bit and used to being led, groomed, and bathed.

In yearling training, a racehorse should learn to accept a bridle and headstall, accept girth pressure, accept a saddle, and the weight of a rider. If a yearling was purchased through a yearling sale, he likely already has learned some of these lessons.

Yearling sales are typically in the early fall season, so the young horses going through the auctions are in the latter portion of their second year. Yearlings purchased from a fall auction are on a fast track.

Shortly after they arrive at their new homes, they are introduced to the bridle, saddle pad, and surcingle. The surcingle is an elastic strap designed to apply pressure similar to a girth strap.

Once the yearling has been tacked up, he is encouraged to walk around in the stall. The horse shouldn’t be allowed to stop moving forward; movement helps to keep them calm.

It takes time to break a horse to ride.

The process of tacking up the yearling and moving him around the stall will continue daily for a least one week. Once the horse is comfortable moving around while being tacked the next step is to introduce weight over its back.

Typically a person lays over on top of the saddle while the horse is held in the stall. By laying across the seat, a person can safely slide off the young horse’s back at the first sign of trouble.

The next step varies, but the two most common methods are:

After a horse completes the above steps, he is ridden in a round pen. In the round pen, it’s taught to respond to the riders’ cues. Once he masters this, he can be ridden in a small paddock and then move on to pasture.

Gates training at this age usually involves walking through open gates. It is a way to familiarize the yearling with the apparatus. Eventually, he will enter, and the gates closed in front of him, and when they open, he walks through. It is not until after a horse turns two that it will break from the gates.

Horses are individuals, and the pace of training depends on how fast they progress through each step. Some horses grow faster and take to training quicker.

Does Age Matter in Horse Racing?

Because the majority of racehorses are young, it makes me wonder how much age affects the outcome of a race.

Age is critical in horse racing. When older horses race against younger horses, there is a weight allowance for horses three and under. The weight is added because four and five-year-old horses typically outmatch younger horses.

A study was conducted on racehorses by the Journal of Equine Science to determine at what age a racehorse runs its fastest. The researchers concluded that racehorses hit their peak at 4.5 years old.

They further determined that horse speed steadily increases until it reaches 4.5 years old and then begins to taper off slowly. Young horses, two and three-year-olds, are not typically competitive against four and five-year-old horses.

What is the oldest a horse can race?

When watching races it’s obvious that most of the horses are under six years old, but every now and again you see one that’s eight or nine. This made me wonder if there is a maximum age for racehorses.

There is no definitive answer to the question of how old a horse can be and still race. In general, horses reach their prime racing age around four or five years old, but some exceptional individuals may continue to compete successfully much longer.

While it is rare for horses to race competitively into their double-digits, there are always exceptions to the rule. After all, as any horse lover knows, every horse is an individual with its own unique personality and abilities.

Why do all racehorses have the same birthday?

By setting the birthday as January 1st, all racehorses in a given year are the same age. This makes it easier to compare their performances and identify potential champions.

While some people argue that this system is arbitrary and unfair to horses born late in the year, it remains the standard in horse racing. As a result, all racehorses celebrate their birthday on January 1st, regardless of their actual date of birth.

Below is a YouTube video showing the early steps of training a horse. 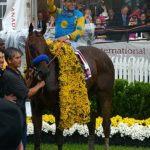 At what age is a racehorse at its best?

In general, a horse reaches full physical maturity between four and five years old. This is the age when a horse’s race performances are most consistent and successful.

Tecovas recently added a bunch of awesome apparel to their markdowns list, like the best-selling Brushed Cotton-Pearl Snap. Tecovas rarely discounts products, but when they do, it's a great time to buy.