I was at a local rodeo to see my sister compete in the barrel racing event and I couldn’t help but notice the chaps that all the bull riders were wearing. It made me think about the origins of the chaps and why they were introduced. I decided to share what I learned.

Cowboys wear chaps to protect their legs from getting scratched up by brush and thorns. They also provide added warmth in the winter and an extra layer of protection from cow horns and other dangers associated with the cowboy lifestyle.

If you are under the impression that cowboys only wear chaps for show, you’re mistaken. Although chaps can be worn as a fashion piece many are functional. Let’s take a closer look at chaps and find out why they’re such an important part of western attire.

Chaps are leg coverings that are typically made of oiled leather and worn over a rider’s jeans. They don’t cover your crotch area or rear end and attach with either a tie at your back or a small buckle in the front.

You’ll notice that the leather strap used to secure chaps is broad across the rear and very narrow in the front. The chaps belt is designed this way to break so you don’t get hung up on a saddle horn or anything else.

Authentic western chaps are commonly made from cowhide leather, but some can be found that are made in sheepskin, bear, buffalo, or even goatskin. Chaps can be also found in show competitions that are solely designed for aesthetics.  These decorative chaps can be made with other synthetic materials such as vinyl or suede.

For anyone who’s ever watched a Western movie, chaps are an essential part of the cowboys riding gear. But where do chaps come from? It might surprise you to learn that they were actually adapted from a Mexican leather leg protector known as an “armas”.

In the 1500s Mexican vaqueros imported cattle from Cuba and often found themselves chasing them through thick brush which often resulted in torn pants. They needed something to protect their pants as they worked. So they began to ride with “armas.”

Armas was originally just large pieces of leather kept on saddles and used to protect vaquero’s legs. Eventually, the vaqueros developed “armitas” a leg covering made from two pieces of leather hung from a belt around the waist.

These covered the thighs and reached below the knees. They were secured by leather straps tied at each side that let them hug your legs comfortably while still allowing freedom movement, armitas also introduced outer fringes.

Vaquero riding equipment made its way north into the southern United States. The armitas were useful to American cowboys however, they tinkered with the design to better meet their needs. The first pair of western cowboy chaps looked more like pants than armitas.

They were made of leather, fit loosely, and covered the cowboy’s entire leg. The only difference between it and a big pair of leather pants was it had no seat.

From their crude beginnings, chaps evolved and in the 1800s the “winged” version became popular. At the beginning of the 1800s, winged chaps were narrow and it was common to find chaps that only covered the top of the legs.

Around the same time apron chaps, also known as batwings, originated in South Texas. They are typically made from leather, without a seat or crotch, and cover the legs from the waist to the ankle.

This style is still popular today and it functions much the same as it did in the 1800s. However, 100 years later, in the 1970s, chaps were appropriated by a whole new culture. 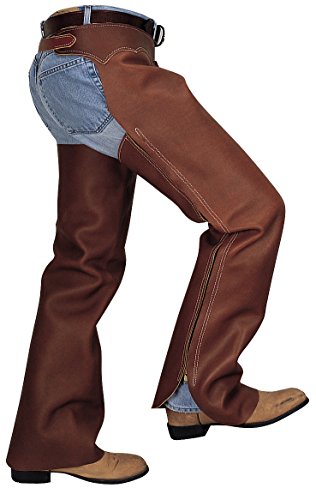 Prices pulled from the Amazon Product Advertising API on:

Product prices and availability are accurate as of the date/time indicated and are subject to change. Any price and availability information displayed on [relevant Amazon Site(s), as applicable] at the time of purchase will apply to the purchase of this product.

I believe the cowboy in the Village People band really popularized the look and helped to make wearing chaps be seen as a way of subverting traditional ideas of masculinity. Gay men in particular found that chaps allowed them to express their sexuality in a more overt way.

Why are chaps used?

Chaps is an Americanized version of the Spanish word Chaparreras which loosely translates into, “for the brush.” If you’ve ever seen a cowboy in an old Western movie, chances are you noticed the chaps he was wearing.

But what are they used for? Chaps are a type of protective clothing that covers the legs from the waist down. They’re typically made from leather or heavy fabric, and they fasten around the waist with a belt.

Whether you’re an experienced cowboy or a novice rodeo competitor, chaps can be an essential piece of gear. Here are the primary reasons cowboys use chaps:

Chaps are an essential part of cowboy gear, and the name is derived from the Spanish word “chaparreras,” which loosely translates to “for the brush.” Chaps protect the cowboy’s legs from thorns, branches, and other hazards while riding through rough terrain.

In addition, they protect cowboys from the different elements or situations they may find themselves in while working on a ranch, such as burns while branding or injuries from a when lassoing cattle.

During the old west days, they were worn by most mounted workers such as stagecoach drivers, and postal workers. Chaps were even used by military personnel during times of war because these tough leg coverings allow for easy movement over rough terrain without their pants getting caught on sharp objects.

If you have ever ridden a horse for a long period of time, you may have experienced some extreme discomfort. Chaps allow you to sit comfortably in the saddle, mount, and dismount while also providing leg protection and seat grip.

Chaps protect the rider’s legs from the elements and from chafing caused by the saddle. They also help to grip the saddle, improving control while riding. The leggings are usually made of oiled or treated leather that is durable, and resistant to water and wear.

When working on a ranch, you may not have the time to deep clean your clothes every night. If you are working in harsh conditions, you may need something to protect your pants while you work.

Chaps not only protect your legs, but they also protect your pants by taking on the majority of the debris that a cowboy’s legs may face every day.

There is no doubt that cowboys living in rough winter conditions struggle to stay warm through tough freezes. Chaps provide an extra layer of warmth if you live in a place that has rough winters.

Some chaps are even specifically made for winter and can have an extra layer of wool designed to keep a cowboy’s legs warm.

What are the different styles of western chaps?

There are many different styles of western chaps, but all of them have one common purpose: to protect the rider’s legs from the elements. There are a few factors you need to consider when choosing the right style of chaps for you.

Continue reading to learn more about the different styles of western chaps and find out which one is right for you.

Chinks were originally designed to proved better airflow in hot weather. They only reach slightly past the knee, barely brushing the top of a cowboy’s boots. They are secured to the upper thigh with a strap.

They are less restrictive than standard chaps making them easier to mount and dismount your horse while still having protection. The shape of chink chaps is somewhere between the shotgun chaps and batwing chaps and is still popular today.

Batwing chaps came around to better suit the needs of a cowboy who does a lot of work off of the horse.  The most traditional version of these chaps is commonly seen at rodeos today. They attach to the upper thigh allowing the bottom of the chaps to flap around for better movement and airflow.

Shotgun chaps provide the highest layer of protection but they do restrict the cowboy’s movement. Their zipped-up, closed-leg design can be rainproof but they also trap heat.

Woolies were an early design of the western chaps when cowboys were not getting good use out of the plain leather. These were usually made from fleece or from buffalo hide lined with things to add resistance to moisture. They are rarely seen today because the design is not ideal for working cowboys.

Are chaps essential for cowboys today?

Although chaps originated hundreds of years ago, they are still used today by almost all cowboys. Whether they are working on the ranch or performing in a rodeo event, chaps have proven time and time again that they are an essential piece of riding equipment that every cowboy should have.

Chaps can provide a nice aesthetic but their main role is protecting the cowboy’s legs from the different elements they face. Working as a cowboy is not an easy job, and having the right equipment can prevent an injury

American cowboys began to wear chaps as a practical workwear garment. They quickly became an essential piece of everyday cowboy clothing, and today they are often used in rodeos and other western-themed events.

Below is an informative YouTube video about wearing chaps when riding.

Why do cowboy chaps have fringe?

The fringes on chaps can be torn off and used as a tie when you need one, in addition, they help wick water away when you ride in the rain.

Why do cowboys wear boots?

Cowboy boots were typically made from sturdy leather that provided leg and foot protection and had high heels that helped to prevent the foot from slipping through the stirrup.

Why do cowboys wear their pants in their boots?

Cowboys tuck their jeans into their boots because they will be less likely to rub against the ground and get dirty. Additionally, tucking your jeans into your cowboy boots gives you better access to the roper boot’s kick-off heel.

Black Friday 20-70% off Everything