This year’s annual trail ride had a vintage feel to it, with riders dressed up in old west clothes such as wide-brim hats and chaps. My grandson was excited by all the fashionable cowboys but wondered if real cowboys back in the day actually dressed like this?

Old West Cowboys were known for their flamboyant style. They wore brightly colored shirts, neckerchiefs, and bandanas. Their pants were usually made of denim or leather, and they favored high-heeled boots, vests, wide-brim hats, and spurs.

Dressing as a cowboy is not as simple as just putting on a cowboy hat and boots. The fashion of the Wild West was full of interesting details. In this blog post, we will look at some of the most popular items of clothing that cowboys donned back in the day. Stay tuned for an inside look at cowboy fashion.

What clothes did cowboys wear in the Old West?

Old West cowboys were known for their rugged style and practical clothing. Due to the harsh conditions of the frontier, their clothing needed to be long-lasting and easy to care for.

They favored tough, durable fabrics like denim and leather, and they often wore their clothes for months or even years at a time without washing them. As a result, Old West fashion was often quite smelly.

Cowboys also tended to dress in layers, wearing shirts, vests, jackets, and chaps to protect themselves from the elements. They typically wore jeans or wool pants, which could be easily mended if ripped.

They also wore chaps, which protected their legs from thorns and brush. Long-sleeved shirts helped protect them from the sun, and bandanas could be used as dust masks or scarves.

Cowboy boots were also essential, as they provided support and traction when riding a horse. In cold weather, cowboys might also wear a coat or a sheepskin vest. And, of course, no Old West outfit would be complete without a wide-brimmed hat to keep the sun out of your eyes.

Although Old West fashion might not be suitable for today’s office spaces, these garments helped Old West cowboys stay comfortable and safe while working on the frontier.

The Old West was a time of great fashion experimentation. Cowboys were known for their sense of style, and they weren’t afraid to try new things. One of the most popular items of clothing during this time was the bandanna.

Bandannas were worn around the neck or head, and they served a variety of purposes. They could be used to wipe away sweat, dust, or blood. They could also be used as makeshift towels or napkins. In addition to their practical uses, bandannas were also considered to be quite stylish.

What type of shirt did old west cowboys wear?

Old West cowboys were a tough bunch. They had to be able to endure long hours in the saddle, often in harsh conditions. As a result, their clothing had to be both comfortable and durable.

One of the most essential items in a cowboy’s wardrobe was a good shirt. Typically made from canvas or denim, shirts provided a key layer of protection from the sun and elements. They also had to be tough enough to stand up to days of hard work yet comfortable enough to sleep in at night.

While there are many different styles of Old West shirts, they all share these essential qualities. Today, those same qualities can be found in the shirts worn by modern-day cowboys.

Why did cowboys in the old west wear vests?

Old West cowboys needed clothing that could withstand long hours in the saddle and all kinds of weather. Vests were a staple of their wardrobe for a few reasons.

First, they provided an extra layer of warmth without being too bulky or cumbersome. Second, they had plenty of pockets for storing things like tobacco, matches, and other supplies.

Finally, vests helped protect the cowboy’s core from scrapes and scratches when working with livestock or riding through dense brush. In other words, vests were both functional and stylish – perfect for the rugged life of a cowboy in the old west.

Why do cowboys wear chaps?

One of the most iconic images of the Old West is the cowboy, clad in a pair of chaps. But why do cowboys wear chaps? There are actually a few reasons.

First, chaps help protect the cowboy’s legs from brush and other debris. Second, they provide a bit of warmth in cold weather. Third, they help keep the cowboy’s pants clean while he’s working.

And finally, chaps add a bit of flair and style to the cowboy’s outfit. So next time you see a cowboy wearing chaps, you’ll know that there’s more to it than just good looks.

Why do cowboys wear cowboy boots?

In the Old West, cowboy boots were a practical necessity. Cowboys spent long hours in the saddle, and their boots had to be comfortable yet tough enough to stand up to the demands of riding and roping.

In addition, cowboy boots provided good protection from the elements. They were made of tough leather that could withstand plenty of wear and tear, and they had high tops that helped keep debris and dirt out.

Cowboy boots were also comfortable to wear, especially when you were spending long hours in the saddle. The high shafts provided support for your feet and ankles, and the pointed toes made it easy to slip your feet into stirrups.

Finally, cowboy boots simply looked cool. They helped cowboys stand out from the crowd and project an image of rugged individuality. They come in a wide range of styles, from simple work boots to elaborate fashion accessories.

Regardless of their origins, cowboy boots continue to be a popular choice for both function and fashion.

Why do cowboys wear cowboy hats?

Old West cowboys were constantly exposed to the sun and had to deal with wind, dust, and other elements. To protect themselves, they began wearing wide-brimmed hats that shielded their face and neck from the sun.

The cowboy hat also helped to keep out dust and debris, and the brim could be used to deflect rain. Over time, cowboy hats became an integral part of the cowboy image, and they are now worn by cowboys all over the world. While many people no longer wear them for practical purposes, cowboy hats continue to be a symbol of the old west.

What kind of pants did cowboy in the old west wear?

One essential item in the wardrobe of old west cowboys was a good pair of pants. Cowboy pants were usually made of sturdy denim or wool, and they often featured reinforced panels to protect against wear and tear.

They also had a high waist and wide legs, which made them ideal for riding horses. In addition, cowboy pants were typically held up with a belt or suspenders instead of a zipper or button closure.

This allowed them to be easily pulled on and off, even when wearing boots. All of these features made cowboy pants the perfect choice for life in the old west. Modern cowboys typically wear denim jeans. Denim is tough and durable, making it ideal for riding and working around the ranch.

Why do cowboys wear spurs?

Cowboys wear spurs to direct their horses’ movement. In the old west, they were useful tools when they needed a way to control their horses during long cattle drives. Touching a horse with the spur rowel causes the horse to feel discomfort and makes it more likely to obey the cowboy’s commands.

Over time, spurs have become synonymous with cowboys and the old west. They are now worn as a symbol of cowboy culture, even though their practical purpose has diminished in modern times.

Today, cowboys still wear spurs when working cattle or during competitions such as barrel racing and roping. In addition to their functional purpose, spurs also serve as a symbol of the cowboy lifestyle. Wearing spurs is a way for cowboys to show their skills and experience. 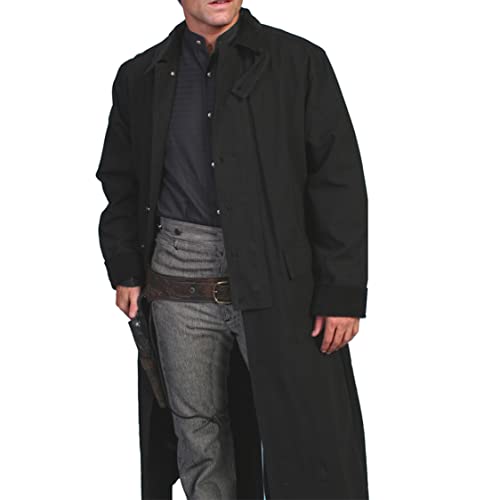 The old west was a time of legends, and none is more iconic than the cowboy. Whether they were herding cattle or fighting off outlaws, cowboys were synonymous with the wild frontier.

But did these rough-and-tumble characters really wear dusters? The answer may surprise you. While it’s true that many cowboys did wear dusters, they were not nearly as common as popular culture would have you believe.

In reality, most cowboys favored more practical clothing, such as sturdy jeans and work shirts. Dusters were simply too cumbersome for everyday life on the range. However, they did have their uses.

Having a duster in your saddlebag would be useful when a cowboy needed to ride through a particularly dusty area or when bad weather threatened to whip up a storm.

Old west cowboys were a hardy bunch, but that doesn’t mean they didn’t enjoy a bit of flair. While many people think of cowboys as dusty, unkempt men, the truth is that many of them took pride in their appearance. And part of that was adorning themselves with jewelry.

Rings, necklaces, and even earrings were all fair game for cowboys. While some people believe that cowboys only wore jewelry for utilitarian purposes, such as to identify their bodies in case of death, the truth is that many cowboys saw jewelry as a way to express their individuality and style.

In a time when most people owned only a few simple items, wearing jewelry was a way to stand out from the crowd. Some even had their initials inscribed on their jewelry so that it could be returned to them if they lost it while out on the range.

So next time you picture a cowboy, don’t forget to imagine him with a bit of bling.

For more information on how cowboys dressed in the old west, take a look at this YouTube video.

Did cowboys wear socks in the old west?

Yes, cowboys wore socks in the old west; they were typically made from wool and were often tall, reaching up to the knee, and had a thick knit that provided both warmth and protection from chafing.

Why did cowboys wear vests in the old west?

In the old west, cowboys wore vests to provide warmth and store things he wanted easy access to, such as tobacco, matches, or a pocket watch. The vest was usually made from thick wool or leather.

Cowboys in the old west primarily rode Quarter horses. However, there were many other breeds used during this period as well, such as Thoroughbreds, Arabians, and Morgans.

Tecovas recently added a bunch of awesome apparel to their markdowns list, like the best-selling Brushed Cotton-Pearl Snap. Tecovas rarely discounts products, but when they do, it's a great time to buy.